Today, we’re pleased to announce a new release for our uninstaller “TrashMe”. This new 2.1.7 version fixes a lot of bugs and other crashes. Thus, it’s highly recommended to update.

We’ve also refreshed the design a little bit, getting rid of colored buttons for a more textual replacement. You’ll also be able to get back to previous page in most parts of the app. Last but not least, there are two bonus features: you can search for new types of junk files (big files, old files) and you can now delete startup items.

Some uninstallers are not so accurate. For example, we compared TrashMe to iTrash when uninstalling CloudApp application (see picture below). At first glance, iTrash gives us more results: 10 files instead of 5 files for TrashMe. But look at the results: even with the « Expert mode » disabled, iTrash is inaccurate, listing some critical files used for Apple iCloud settings. 5 files among the 10 files founds are completely wrong.

So, be careful, always choose an uninstaller with high accuracy.
TrahsMe is only 7.99 US$, available on the Mac App Store. 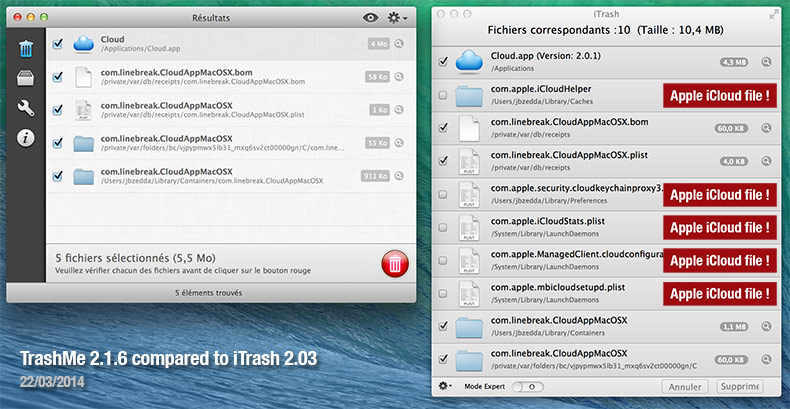 Today, we’re pleased to announce a new release for our uninstaller « TrashMe ». This new 2.1.6 version is mostly a bug-fixing release : all glitches occurring on 10.9 Mavericks are now fixed and we’ve improved scrollbars. In addition, we’ve also implemented a better algorithm to find related files (more files will be found) and a new setting is now available to auto-close TrashMe after uninstalling an application.

Many users are posting some comments on the Mac App Store about TrashMe being unable to uninstall apps. We also receive some emails about the same « issue », so we think it’s time to clarify this restriction a little bit more.

First, you need to know that publishing an application on the Mac App Store is something quite difficult, especially for small developers. Apple has written very restrictive rules that developers must conform to. One of these rules is about privileges: an application must not ask for user’s password in any case.

But some applications installed on your Mac have special privileges, mostly applications installed through the Mac App Store. You can test by yourself: if you try to put one of those apps to the Trash, OS X will ask for your account’s password. The problem is that TrashMe can’t ask for your password due to Apple restrictions. This is why you can see a warning message when this situation occurs. Hopefully, we’ve developed a small add-on that will allow you to uninstall this sort of applications, by asking your password.

We think this is a balanced solution: being on the Mac App Store is a chance for us, because it’s very easy to buy and update application for end-users. We didn’t find any alternative, after many hours spent to discuss with Apple employees. So, we hope our customers will understand that this is not an issue, but « on-purpose »…

Check our Frequently Asked Questions to download this add-on.

We’ve updated our application TrashMe, mostly to fix bugs. Smart detection was sometimes popping improperly, after you’ve restarted your computer. We’ve also fixed some cosmetic bugs and some issues with history (search was not working and sort order was ascending instead of descending). Among improvements, we’ve added spanish translation (thanks to Jose Manuel Calero) and related files results are now showing filesize.

TunesArt did not receive any update for almost one year, but we did not give up our iTunes companion. We’re currently preparing an update, with some visible enhancements and some other invisible improvements.

First, upcoming version will be sandboxed, as requested by Apple for any update on the Mac App Store since 1st June 2012. This part was not so easy, because we needed to test all parts of our application, in order to detect possible issues. For end-user, this does not change anything except that he feels more secure 🙂

TunesArt version 1.6 will also be fully compatible with OS X Mountain Lion, as some issues are occurring with version 1.5.1 (mostly when you switch from one space to another one). In addition, all the application will be optimized for Retina display of new MacBook Pro, and that was a lot of work.

Among new features, TunesArt will be able to use the notification center found in Mountain Lion, the search window will be revamped for better performance, many UI parts will be improved and many bugs will be fixed. Arrival on the Mac App Store was not really easy because Apple asked us to remove fetching of lyrics from LyricWiki. We did not find any affordable replacement, as the cheapest solution would cost 25,000 $USD per year. We’re aware many users are disappointed about this lack of lyrics fetching, but there will be a small new feature in upcoming version (you’ll have to find it by yourself!).

We hope most users will be happy with this brand new version, so stay tuned, it’s coming very soon!

We’ve just updated our application « TrashMe » to fix two issues: one with the smart detection not working properly (app was opened but with no visible window) and the other one displaying the fullscreen button in titlebar.

By the way, we’ve added a new feature in latest version: you can search for junk files on your hard drive, for example Windows files (Desktop.ini, Thumbs.db) or other files (.svn, .git). Upcoming version should add new languages and some improvements too (modify favorites password…).

With Mountain Lion being released few days ago, TrashMe needs an update. The application is working fine, but you may notice that the main window is not as beautiful as other apps, and some icons are missing in the title bar. In the meantime, we’ve optimized TrashMe for Retina display of new Macbook Pro and we’ve fixed bugs (for example, the smart detection was crashing for some users).

This update has been sent to Apple for reviewing, but these days, they are pretty slow. Please be patient, the update should be released in less than 2 weeks (we hope so).

EDIT : the update is now available on the Mac App Store!

We’re currently working hard on improving our uninstaller « TrashMe ». First, we’re developing a new tool to search for junk files, those little files completely uselesss even though they don’t take too much space on your hard drive. For example, when you copy folders from an old Windows partition, you may find a lot of useless « Desktop.ini » and « Thumbs.db ». Even with Mac OS X, you may want to delete « .git », « .svn » or « .DS_Store » files. Next version of TrashMe will help you searching and removing this kind of files.

The other feature we’re working on is the « Orhpans search ». This feature was part of TrashMe 1.x but was not perfect as it was searching only for Preferences files left by already uninstalled applications. So we decided to wait a little bit before getting the feature back into TrashMe, because we want something more powerful. This feature will be back either in upcoming version or the next one, depending on a beta test we will offer.

Be sure that we listen carefully to our customers feedback, so don’t hesitate to contact us if you’ve got some specific requests.

After several weeks of hard work, we are pleased to announce that TrashMe 2.0 is now available on the Mac App Store. This is a major update with a brand new user interface and great new features. Along with our powerful uninstall mechanism, we’ve added a « Favorite apps » manager where you can store registration information and other notes. We’ve also integrated a caches cleaner and a tool to delete only some files in your Trash. Note that you need to download a small add-on in our FAQ to be able to remove apps with admin privileges (this is an App Store restriction).

Our application is compatible with Lion. Just one note about the uninstall mechanism built in 10.7: Lion is able to « uninstall » only apps downloaded from the Mac App Store, and not the other ones. In addition, Lion is only removing the main bundle and not its related files. So, even with Lion, TrashMe is very useful!

You can buy TrashMe at a discount price until 26th of July 2011 on the Mac App Store. Read more on this page.